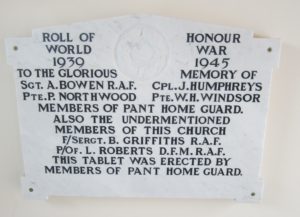 Pant Memorial Institute was built in 1922 as a war memorial, and is listed as such on the War Memorials register. The building originally carried a World War 1 roll of honour, which unfortunately was lost sometime in the late 1970s. Our WW1 casualties are commemorated on the memorial outside Llanymynech church, and some are also buried there. We also now have a copy of the Morton Parish roll of honour for Pant, with the original in Oswestry Town Museum.

Follow these links for more information about our World War 1 casualties:

This memorial tablet was originally in the United Reformed Chapel, (formerly the Pant Congregational Chapel) which is why the text refers to ‘members of this church’. When the chapel closed in 2004, the plaque was moved to the hall, and re-dedicated in its new home on 11th November that year. It now forms the centrepiece of our annual remembrance ceremony and is separately listed on the war memorial register. Our act of remembrance commemorates the dead of all wars.

There are six names on the tablet. Three men were killed in action while serving with Bomber Command, and three were members of the Pant Home Guard who died during or shortly after World War II. Underlined names link to their commemorative certificates from the Commonwealth War Graves commission.

Home Guard records are difficult to find, and many are still protected. The Pant Home Guard was headquartered at the hall, and believed to be led by Lt W H Lloyd who was the local florist. A William Henry Lloyd is recorded living at Waen Wen, Crickheath, as a farmer on the 1911 census, and at Yewtree, Crickheath on the 1939 register.

Any additions or corrections would be most welcome; please contact us.

Wireless Operator/Air Gunner Bowen was the son of Mr and Mrs Robert Bowen of 1, Railway Terrace, Pant. He was educated at Llanymynech School and before the war was working in the office at Nantmawr Quarries. He volunteered for the RAF in August 1940, and was also one of the first to join the Pant Home Guard. He was a member of the Pant Congregational Church.

He was one of a crew of five in Wellington III Z1606 which took off from RAF Marham at 2357 hours on 25th July 1942, captained by Pilot Donald Felt from Canada. This was the 19th operation for this crew, including a successful search and rescue for a man stranded at sea. They had taken part in all three of the “thousand-bomber” raids.

The raid of 313 aircraft was targeted on Duisburg, Germany. Twelve aircraft did not return, including Z1606 which crashed near Krefeld. The crew were initially buried at Houptfriedhof Central Cemetery in Krefeld. They were moved to the Commonwealth War Graves commission cemetery at Reichswald Forest, Cleves, Germany on 10th June 1947, where he is buried in plot 28, row D. Sgt Bowen is also commemorated on the war memorial at Morton Church, and at the Bomber Command memorial in Lincoln.

His gravestone reads: ‘Remembrance is a golden chain, that binds us till we meet again.”

CPL J HUMPHREYS: This man is difficult to trace for certain, but is believed to have been born in Oswestry in 1876. He was the fifth son of Edward and Eliza Humphreys, and was shown as living with them in Penygarrig, Pant on both the 1881 and 1901 censuses.

He enlisted as a volunteer in the Shropshire Light Infantry Militia on 26th October 1893, aged 18 years – at this time he was working for Thomas Savin in Oswestry as a quarryman. He attended militia training regularly each year until 1899, fulfilling his entire six year commitment. His service number was 3071. The militia later became the 3rd Special Reserve battalion of the KSLI.

By 1901 he had returned to Pant as a general labourer, and in 1911 he was lodging with Charles and Margaret Watkin at Canal Cottage, Pant, and working at the Llanymynech Lime Kilns. The 1939 register shows a John Humphreys born on 24th January 1875 living at 11 Trimpley, Ellesmere and working as a railway signalman. He is believed to have died in 1941 aged 65.

PTE W H WINDSOR: William Henry Windsor was born on 10 July 1887 in Llandysilio. He was the eldest of the seven children of William Griffiths Windsor and his wife Emma.

William was a bricklayer by trade. He enrolled in the Mersey division of the Royal Naval Volunteer Reserve in 1915 aged 25, and saw active service as an Able Seaman in WW1. For this he was awarded the 1914-1915 star and the Victory Medal.

He married Beatrice Mary Potter in Llandysilio in 1925, and they are recorded at Bronwylfa in the Oswestry Rural district in 1939. He served with the Pant Home Guard. He died suddenly on 16 February 1947 aged 59, at his home at 10 Bronwylfa, and was survived by his wife and son Archie (William Archie, born 1926) He is buried in the churchyard of St Tysilio, near Four Crosses, although his grave marker has not survived.

He had a younger brother, Richard Edward Windsor, who served with the 17th Battallion Royal Welsh Fusiliers, service number 69218. Richard died from wounds aged 24 on 7th September 1919 and is also buried at St Tysilio, next to the grave of his parents.

PTE P NORTHWOOD: Pryce Northwood was born on 15th March 1904 in Ellesmere. He was the fifth of the six suriving children of John and Sarah Northwood.

He was a schoolboy aged 7 at the time of the 1911 census, when the family were living at Mount Pleasant, Llanymynech. His father worked as a railway plate layer.

Pryce Northwood was recorded as living in the Oswestry Rural district in September 1939, with his widowed father, brother Francis and sister Lucy. He worked as a roadstone quarrier, presumably at Llynclys. After the war he remained in the family house at Brynmelyn, Llynclys. A dance was held at the hall in mid-1946 for his benefit (circumstances unknown) and the hall committee did their bit by waiving the hire charge.

Pryce Northwood never married, and died on 8th March 1947 aged 42. He is buried with his parents in the churchyard of St Phillip and St James at Morton. His gravestone reads ‘Silent Sufferer’. He left his effects to his unmarried sister Mary. His younger sister Lucy, later Mrs Goodrich, died in Oswestry in 1998.

F/SERGT B GRIFFITHS, RAF: Sergeant (Flight Engineer), Basil Griffiths, 1578754, 75 Sqn Royal Air Force Volunteer Reserve. Born in 1922 and a bricklayer by trade, he lived at Shirley Gorse, Pant and worked in the family business, Robert Griffiths and Sons. He was the third eldest son of Robert and Cicily Griffiths. He had a sister, Margaret, and three brothers Ken, Don and Len.

On the night of 15/16 June 1944, he was one of the seven crew of Lancaster Bomber LL888. The aircraft took off at 2309 from RAF Mepal in Cambridgeshire and was commanded by Flight Sergeant Roland Betley from New Zealand. Their mission was to bomb the railway yards at Lens and Valenciennes, having returned safely the night before from an attack on shipping at the port of Le Havre. They were part of a squadron of  224 aircraft and the mission was completed successfully. As they began the return, they were attacked by enemy fighters and LL888 was shot down, crashing near Rieux with no survivors. Ten other aircraft were also lost.

His Wing Commander wrote to his parents shortly after he was reported missing saying “what a fine brave lad Basil was and a very clever Flight Engineer.” . His brothers Don and Len also served in World War II but thankfully both returned home safely.

The crew were located and were buried with honours at Rieux Communal Cemetery, near to the site of the crash. Basil is also commemorated on the Bomber Command memorial in Lincoln. Basil’s nephew was born in 1949 and named for him, and still lives in the village today.

Llewellyn Roberts was born on May 19th 1920 at Leighton, Welshpool. He was the youngest son of Thomas Morris Roberts and his wife Edith, of Idris Cottage, Pant. He was educated at Llanymynech School where he became head boy. He entered the RAF as a boy entrant, nominated by the Shropshire Education Authority and recommended by his headmaster, Mr R.W. Evans.

He was awarded the Distinguished Flying Medal on 12th May 1943. His recommendation for the medal read “Flight Sergeant Roberts has flown operations since the beginning of the war. A first class wireless operator, he inspires confidence in all with whom he flies. This airman has proved to be a most valuable member of air crew.” Shortly after this he was promoted to Pilot Officer.

On the night of 11/12 June 1943, he was one of the seven crew of a Halifax DG406 MA-V from 161 squadron, captained by Flt/Lt Alfred Foster. They took off from RAF Tempsford at 2320 on Special Operations duty for operation ‘Physician’. They completed at least one part of their mission that night, but news was later received ‘from a secret source’ stating that an aircraft fitting their description had been seen to be shot down in flames by ground flak. They were last seen near Beauvais, France, and may have crashed into the English Channel.

The aircraft and crew were never found. P/Of Roberts is commemorated at the Runnymede War Memorial in Surrey, panel 133, and on the Bomber Command memorial in Lincoln.

‘When You Go Home, Tell Them Of Us And Say,
For Your Tomorrow, We Gave Our Today.”