What happened to the original WW1 roll of honour?

Pant Memorial Institute was originally built in 1922 as a memorial to the dead of what was then known as the Great War. A wooden plaque in the hall bore the Pant roll of honour for many years. These names are from the Llanymynech parish side of the village, although the hall itself lies in the Morton parish side.

For reasons unknown, this plaque was lost some time in the late 1970s. We were hoping that we would find it in the 2018 floor refurbishment, but it was not to be.

The building itself is the WW1 memorial for Pant. It also now contains two others:

With no existing WW1 roll of honour, we have generated our own. This page gives more information about those men from Pant honoured on the memorial at Llanymynech, or buried in Commonwealth War Graves in the cemetery at St Agatha’s, Llanymynech.

Click on the underlined names to see the commemorative certificate from the Commonwealth War Graves commission.

2nd Bn. King’s Shropshire Light Infantry, 6828.  Born in 1881, son of John Jones of no 2 Railway Terrace Cottages, Pant. Before the war he was employed on the London and North-West railway at Trench crossing.

He had served for eight years and spent four months at the front. He was killed in action in Belgium on 9 May 1915, aged 34, having been hit by a shell that exploded in his trench.

With no known grave, he is remembered on Ypres (Menin Gate) Memorial, Belgium. Panel 47 and 49. Uniquely among these men, he is also commemorated on the Morton Roll of Honour.

He had only been on active service for a few weeks when he received shrapnel wounds in action. He died of those wounds on 28th October 1917 aged 19. Buried at Dozinghem Military Cemetery, Belgium. Grave IX. B. 18.

1st Battalion Kings Shropshire Light Infantry, 9893. Born in Wolverhampton, he was the son of Thomas Lloyd and the late Emma Lloyd, who lived at 44 St Owen’s St Hereford. He had been living with Mrs Mary Saddler of Railway Cottage, Pant, at the time of his enlistment in Wolverhampton on 6th March 1912. She described herself as his foster mother, and claimed a pension for him in 1920 when she was aged 80.

A newspaper report describes his ‘considerable service’. Killed in action in Belgium, 22 Oct 1914 aged 20. With no known grave, he is  remembered on the Plogsteert Memorial, Hainault, Belgium.

116963, 251st Brigade “C” Bty. Royal Field Artillery.  (and Royal Horse Artillery). He was born in 1886 at The Gin House Pant. His parents were William and  Elizabeth Roberts and he was one of eleven surviving siblings. On the 1911 Census it stated his occupation was a limestone quarryman.

He was born in Oswestry, the son of Joseph Powell. The 1911 census shows that he was married to Margaret and that they were living at 1 Greenwich Cottage, Pant. His occupation at this time was a bricklayer.

He enlisted on 10th December 1915 at Oswestry, and his attestation document has survived. He was living at Mount View, Pant and was aged 35 years and 1 month at the time, giving a birth date of November 1880. He had married Margaret Ellen Francis Griffiths at Llanymynech Parish Church on 4th June 1908. Their children were Arthur (Born 9 Aug 1910) and Phyllis Amelia (born 30 June 1915). The records also show that in 1919 he had a brother John, aged 44, living at Penylan Lane Oswestry, and a sister Mary Ellis, also living in Oswestry.

Margaret was awarded a pension of 18s 9d a week from March 1918. A small number of his effects were returned to her in November 1918.

He was born in 1893 at The High, Penyfoel and later lived at Yates Cottage Pant. His parents were Albert and Caroline Owen and he was one of eleven children. A younger brother George Albert Owen was serving on HMS New Zealand by 1919.

He enlisted at Llantsantfraid on 22 April 1912 as a private, initially in the Territorial Force. At this time he was working as a rock labourer for a Mr Nicolson. He signed the agreement to serve outside the United Kingdom ‘in times of National Emergency’. He trained at Rhyl during the early stages of the war.

He was promoted to Corporal in January 1915, and was posted abroad in July 1915. He received a gunshot wound in the left arm on 10th August 1915 at Suvla Bay, Gallipoli. He was invalided back to England on 10th September 1915.

Service No 26504, 7th Bn. King’s Shropshire Light Infantry, and previously no 3019 in the Montgomeryshire Yeomanry. He was born in 1889 in Liverpool, son of Edward T Brown and Sophia Brown. He had two brothers, Albert and Ronald. By 1914 they were living at Brook House, Pant, having previously been resident at 23, Lisburn Road, Liverpool. James was an apprentice butcher and his father Edward was a police constable. His father was born in Aberhafesp, Montgomeryshire.

He died of wounds in France on 29 September 1918, aged 23. Buried at Sunken Road Cemetery, Boisleux St. Marc, France. Grave III. B. 8. His gravestone reads ‘Thy Task is O’er’. The photographs below were taken in November 2021. 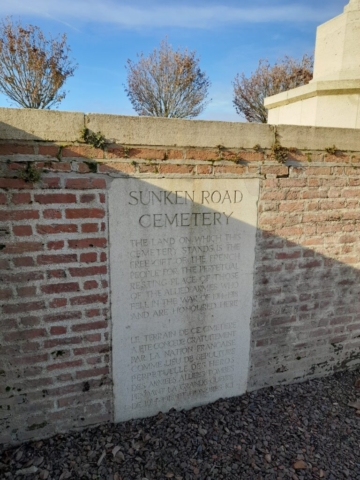 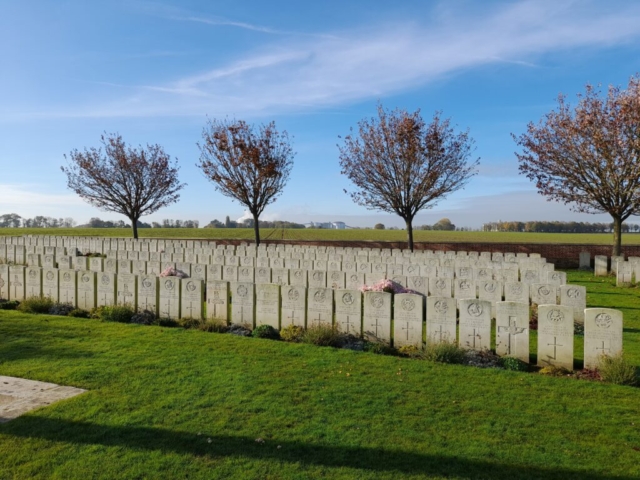 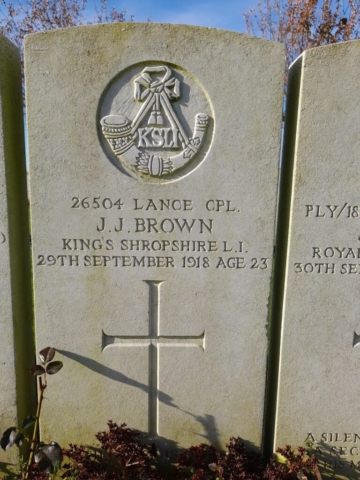 Service Number 67840 (possibly also 31320)  53rd battallion South Wales Borderers. Born in 1900 in Llanymynech, youngest son of Elizabeth and Joseph Jones. Brought up at the Cross Guns, Pant, and then at nearby Upper House, Underhill Farm, Pant.

Enlisted 28th April 1918. The 53rd Batallion was the ‘young soldier’ batallion and was based at Kinmel Park, Bodelwyddyn (near Rhyl). He died on 9 October 1918 aged 17 at Kimnel Park Camp, Military Hospital . The cause of death was recorded as ‘bronchial pneumonia’, possibly the ‘Spanish Flu’ pandemic that claimed so many lives at this time. It appears that 80 soldiers died of the same cause .

He is buried with a CWGC headstone in the churchyard of St Agatha, Llanymynech, in the ‘new ground’ section. He lies next to his half brother Robert Jones.

Robert Jones was born in Pant in 1886, and appears on the 1891 census aged 4, with his three brothers and his widowed mother Elizabeth, nee Jasper. They lived on Ratcliff Hill. In 1911 he was living with Elizabeth, her husband of 18 years Joseph Jones and several siblings at Underhill Cottage, Pant, and working as a labourer in a stone quarry.

The family made no distinction between siblings and half-siblings on this census, even though several of the children clearly pre-date this marriage. It appears that Elizabeth’s first husband (Robert’s father) was John Jones, whom she married in Oswestry in May 1883. She married Joseph Jones in late 1892, also in Oswestry, so everyone had the same surname.

Robert Jones enlisted in Oswestry on 28th October 1914 aged 28 years & 10 months. He gave his trade as a labourer, and next of kin as his father, J. Jones of Underhill Cottage, Pant. He was half-brother to Osborne Jones.

Detailed service records have survived for Robert Jones. He was posted to 3/Kings Shropshire Light Infantry, service number 15062. Posted to France and joined 2nd Battalion 07-04-15. He first saw active service 8th April 1915, and was wounded on 5th May at Ypres. This sent him to hospital in Boulogne and then back to the UK on 9th May.

He returned to France on 3rd January 1916 and joined 1st Batallion on 15th January. He received a shotgun wound (causing a fractured skull) on the 9th February 1916 in trenches in La Brique sector. He was again sent to various hospitals, recorded in Boulogne on the 11th of February and reported as dangerously ill on the 14th. He was returned to the UK on 5th March 1916 where he was admitted to King George Hospital, London, remaining there until the 13th. It was reported that he had been wounded in the back of the head by a piece of shell and was unable to use his right arm. He was left with vision and speech problems, and so was discharged from the Armed Forces on 19th June 1916 as ‘no longer physically fit’.

He was awarded the Victory medal, the 1914-15 star and the British War Medal. He was a member of the Pant football team and very popular among his workmates. The records show that he continued to do odd jobs, usually as a gardener.

Robert Jones died on 10th November 1918, one day before the Armistice and shortly after his half-brother Osborne. (Some records give the date as the 7th). The Llangollen Advertiser reported that the cause of his death was influenza (‘Spanish Flu’), although his war wounds would have made him more susceptible. His baby son died just before him and was buried with him in the ‘new ground’ section of St Agatha’s, Llanymynech. His wife was also ill at the time, her fate is unknown. However his gratuity was paid to his father-in-law, John Hughes, which indicates that she did not survive.

Robert Jones’ war medal was found in nearby Llynclys in 2011 and has been preserved. If anyone related to him reads this, please contact us – we would like to return the medal to the family.

Due to the loss of most of the WW1 service records in the Blitz, the amount of information available varies greatly. In some cases records have survived and the details are recorded above.  Some information also comes from the Llanymynech Community Project and is acknowledged with great appreciation.

This page is a work in progress. Further information or corrections are most welcome; please email secretary@pantmemorialhall.org.uk

“At the going down of the sun, and in the morning – we will remember them“