What is the story behind this?

Pant Memorial Hall was originally built as a memorial for World War 1. As the 2018 centenary of the armistice approached, the committee had the idea of adding an artwork to the hall. This was to commemorate the event and also to provide a celebration of our village and the beautiful area in which we live. We wanted to create a mini tourist attraction for Pant, and to draw more attention to the village hall. Read on to find out how we did it.

Impressed? Buy a Postcard and support our hall

*** We have produced a full-colour postcard of the artwork which is available to buy direct from us. Five postcards cost £2 and that includes UK postage! Just click Buy Now below to go to our PayPal account. ***

How was the design created?

The committee had many ideas for what the artwork should be, with considerations for style and funding. The committee wanted the artwork to be on the outside of the hall so that it could be viewed at any time. A bronze was rejected as unfortunately these are vulnerable to theft, hence the decision for ceramic. The work of Neil Dalrymple had been seen by one of the committee, and it was felt that his artistic style, experience with these murals and flexibility would work out well.

The initial plans were presented at our 2018 Annual General Meeting, where Neil gathered ideas from all those present. He also visited many of the sites shown to take photographs. The artwork concept was again shown at one of our 2018 summer ‘pop-up cafe’ events for further comment. The agreed theme was celebration of our area, its landscapes and its history. People wanted some commemoration of the armistice, but not too obvious a military theme.

How was the artwork funded?

Having just completed major essential works to our entrance hall, we were reluctant to deplete the charity reserves further but still wanted to make the project happen. We are very grateful to the Tirgwynt Wind Farm community fund and the   Mary Hignett Bequest fund adminstered by the Rotary Club of Oswestry. These two grants covered the cost of the artwork and allowed us to give Neil the go-ahead to start work in January 2019.

The car park changes needed to protect the artwork (and ensure that the fire exit route from the hall stays clear), the explanatory plaque and the new planter were also funded by donors. Our thanks goes to them all for their help.

What were the design considerations?

As well as being attractive and interesting, the artwork had to be long-lasting and robust. Neil’s ceramic firing technique is fully weatherproof, as the site is exposed to the elements. The ceramic is in low relief so that it cannot catch on anything nor be damaged easily.

The artwork had to be placed near the main entrance to the hall, so that all hall users would see it and so would passersby. This doorway is also one of the hall fire exits. Hence we needed to prevent parking there, but did not want to detract from the artwork with a ‘fire exit’ sign. We also had a damaged area of tarmac near this part of the hall.

The solution was to dig out a quarter circle including the damaged tarmac, replacing it with gravel retained with brick edging. The bricks are flush to the tarmac level and hence there is no trip hazard. A planter on the gravel and two more next to the artwork prevent parking, and ensure that any manouevring vehicles cannot hit the ceramic.

How was the artwork made and installed?

Neil produced the artwork in clay at his studio in Ruthin, Denbighshire, following several iterations of the design. Two hall committee members visited the studio for final sign off in February 2019.

For ease of transport and firing, the artwork was produced in sections. These were left to dry, fired, painted, fired again and then glazed.  Meanwhile the committee arranged the car park works. Here are pictures of the creation of the artwork – click on them to enlarge and see a caption. 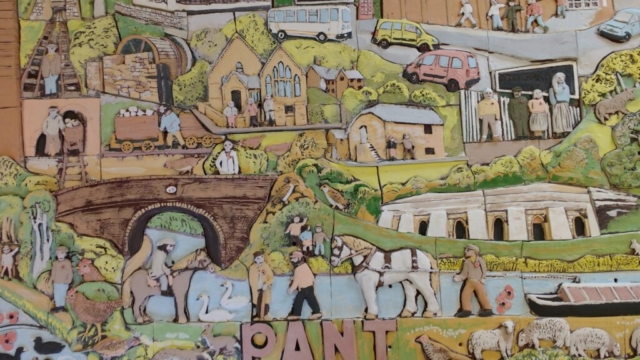 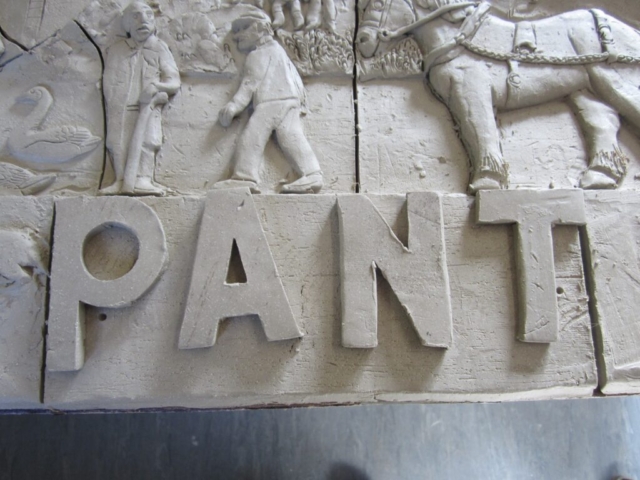 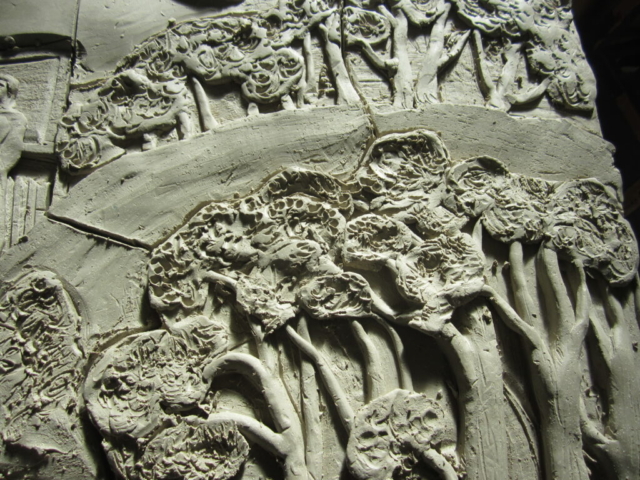 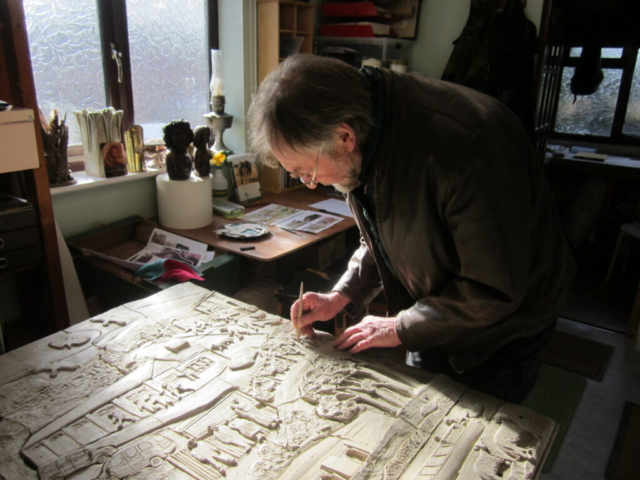 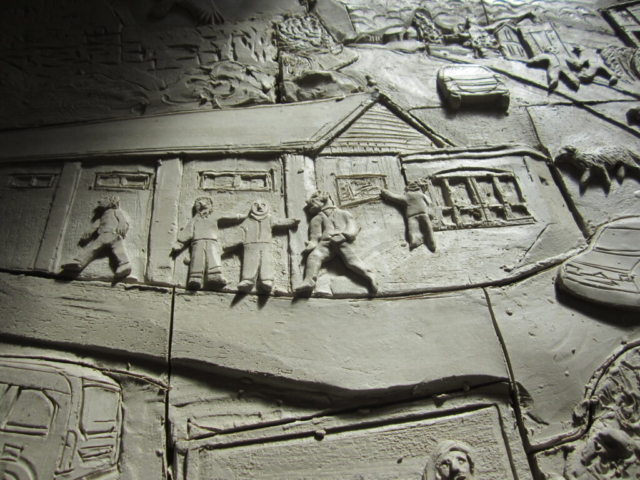 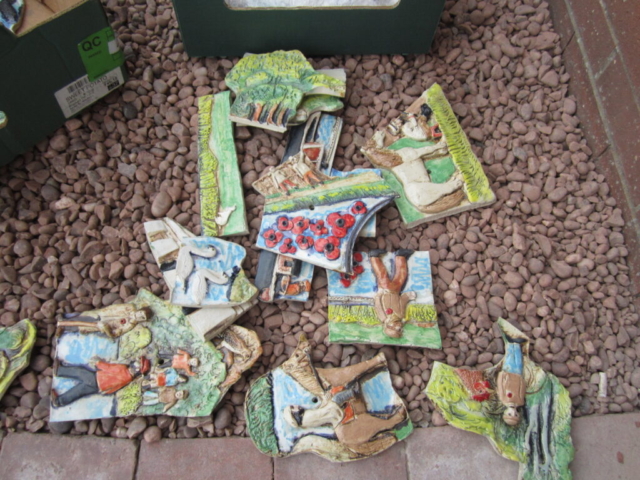 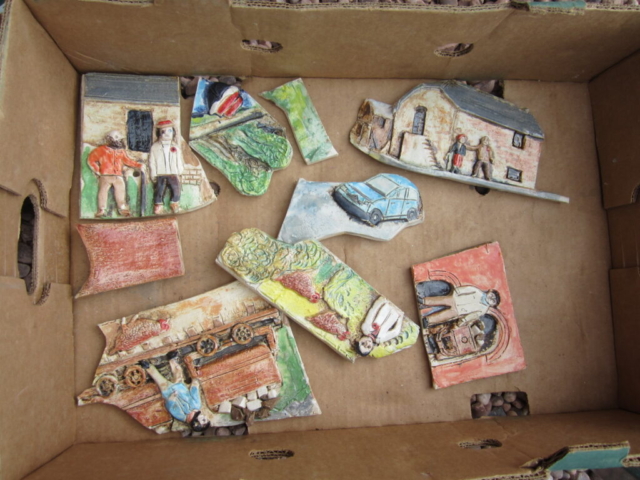 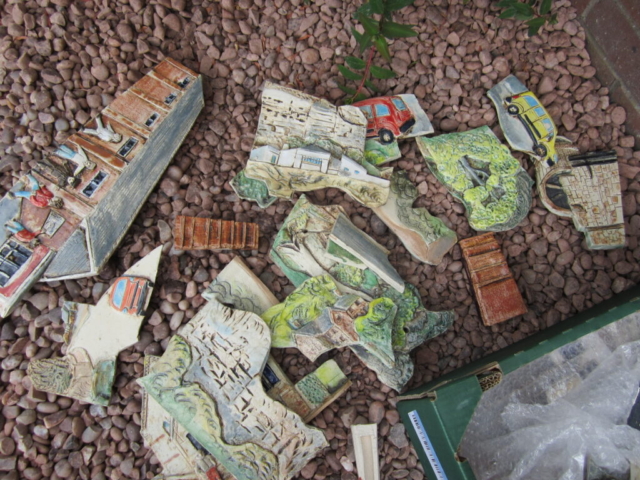 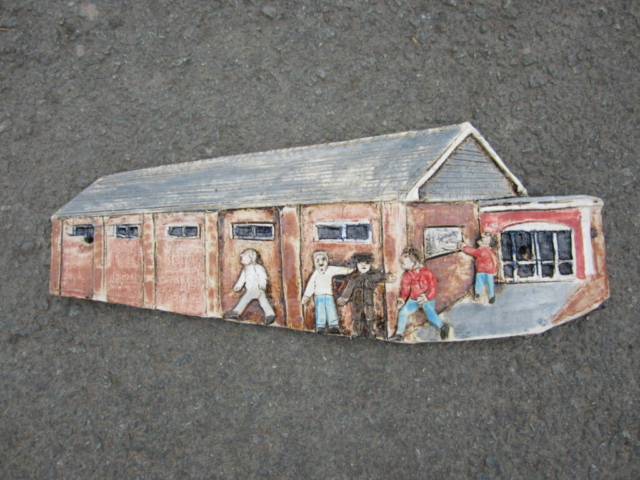 Fortunately the weather held for installation day, 24th May 2019. With the help of committee members, the waterproof backing board was attached to the hall and the 96 sections of the ceramic cemented in place. Neil then returned on May 27th to seal the remaining gaps and touch up the work with oil paint.

Here are some photos from installation day. Quite a job! 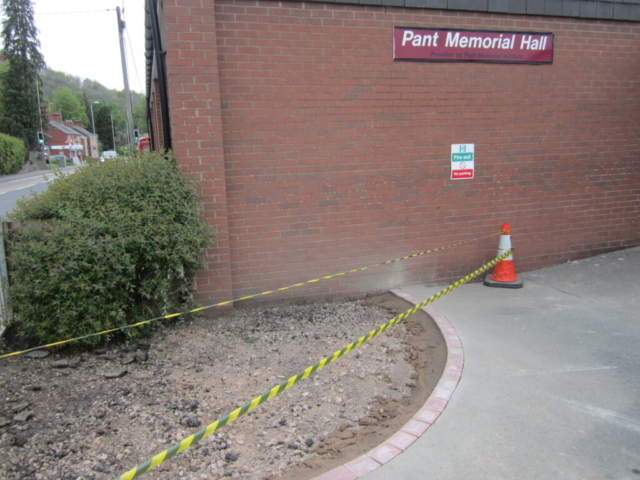 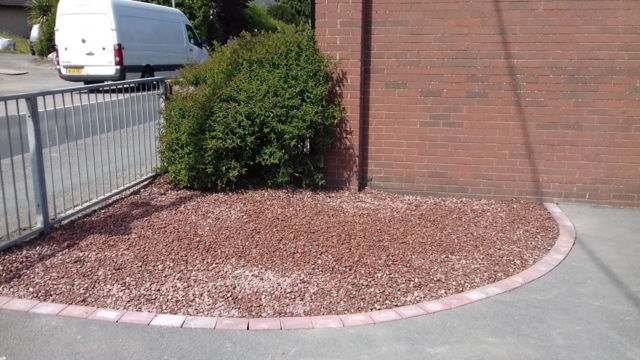 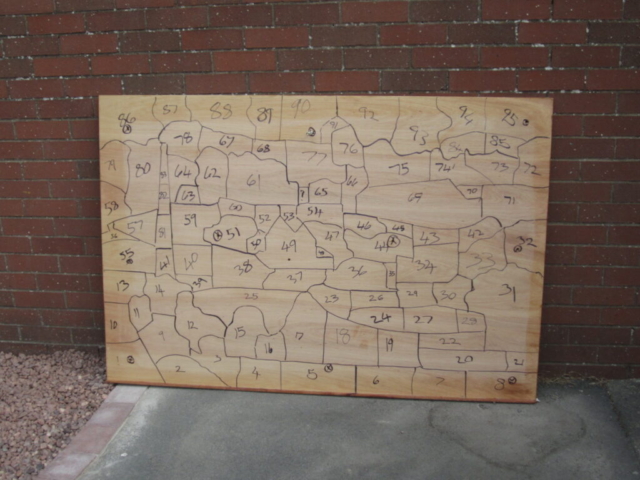 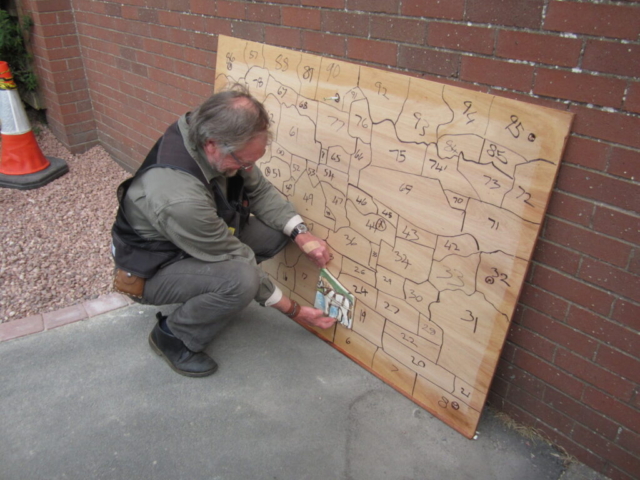 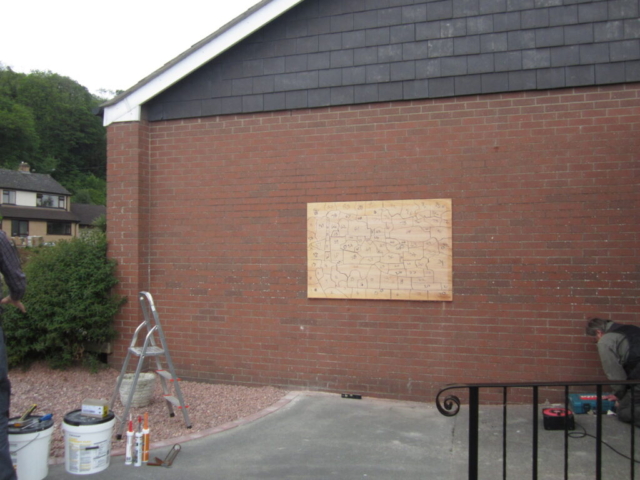 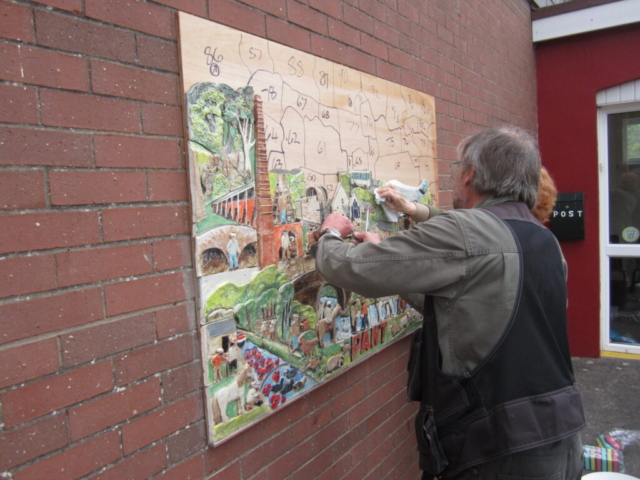 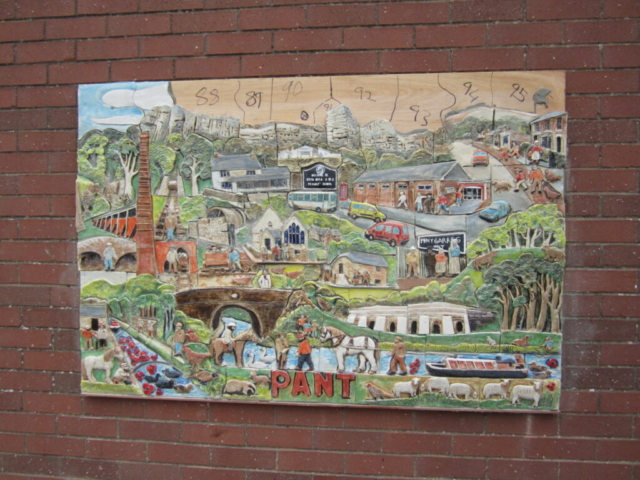 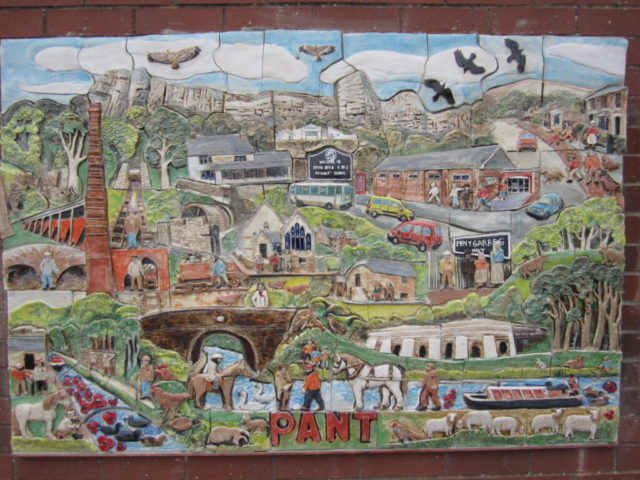 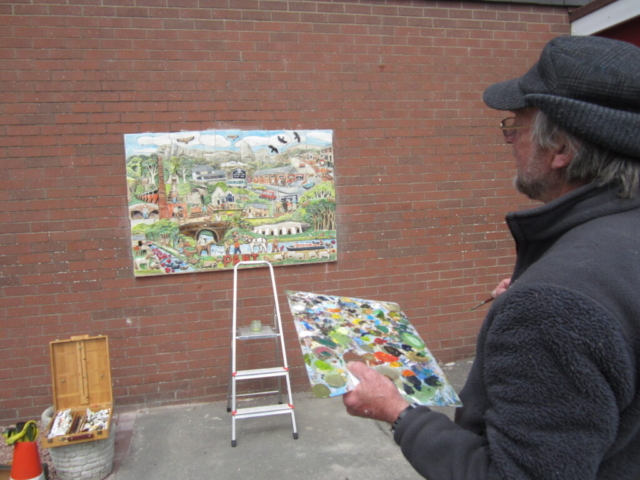 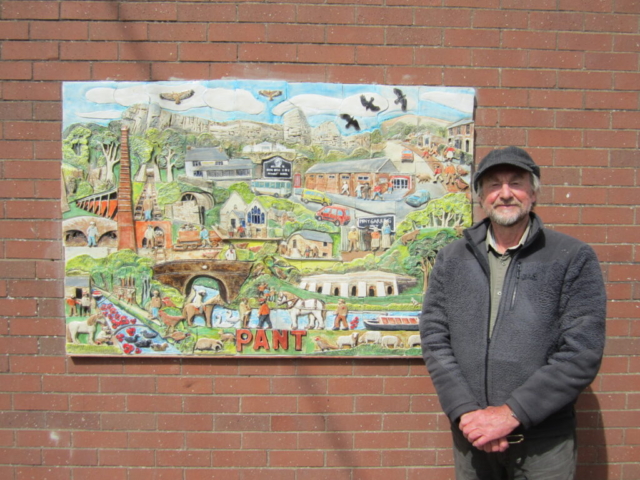 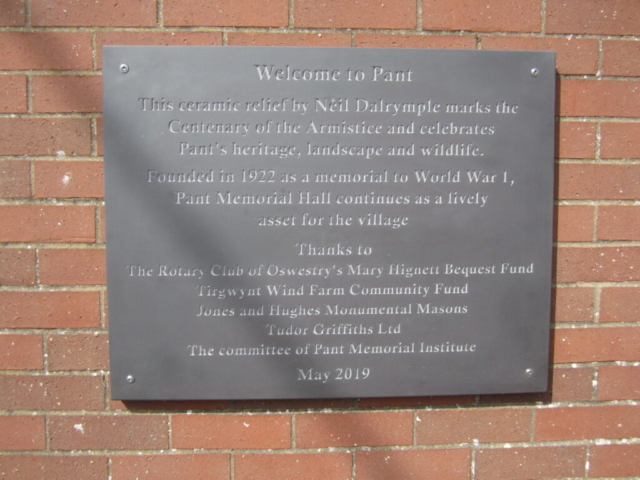 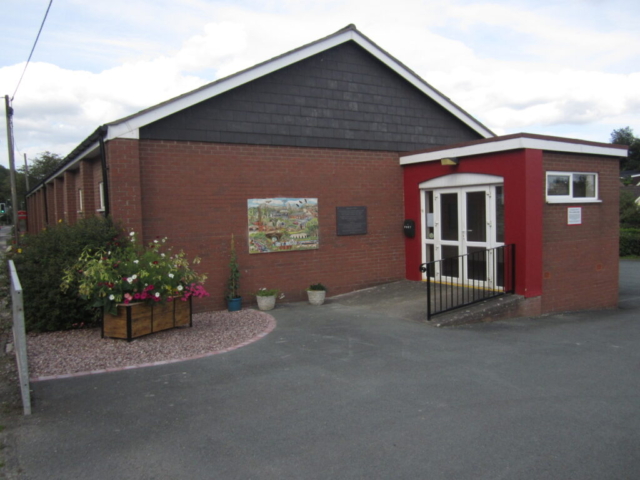 What is included in the artwork?

The design shows Pant past and present, representing our landscapes, people and history. Features to look out for include:

The artwork is in low relief for durability, but some of the cars have 3D wing mirrors and features such as the kilns have a real interior.

What about the plaque next to it? The plaque was also donated. It gives a brief background to the artwork and the hall. It also lists all the generous sponsors who allowed us to make the project happen.

We were delighted to host a ‘meet the artist’ event for our sponsors on August 16th 2019. Read all about it on the Rotary Club of Oswestry’s website here.

Thank you again to all involved in adding this lasting improvement to the hall and our village. Stop to have a look at any time! 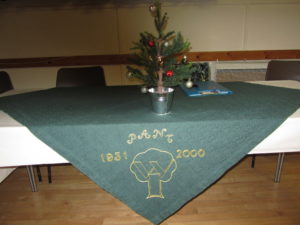